Mukesh Gupta is an international speaker and a facilitator for transformational dialogues, retreats and workshops. He has been on this meditative and transformative journey for more than two decades. He is deeply inspired by the teachings of J. Krishnamurti and other teachers/philosophers who are deeply concerned with ending psychological separation, duality, conflict and suffering within human consciousness through the direct perception of the existential reality not just from the intellect but from the heart and the whole being. During his long experience of working with students, teachers and seekers from all walks of life Mukesh developed his unique "Meditative & Transformative Self-Inquiry" approach which is primarily based on having an insight in the living moment from the stillness and compassion of the heart and mind.

Mukesh was also associated with the Krishnamurti Retreat Centre in Varanasi, India for two decades where he focused on researching and translating the works of J. Krishnamurti as well as conducting retreats and workshops. He is a traveler at heart and regularly facilitates meditative self-inquiry based retreats around the globe. He has conducted over two hundred retreats and seminars during the past one decade. He holds a Master's Degree in Indian and Western Philosophy. He does not consider himself as any spiritual authority but only a fellow-traveler and a tiny explorer of truth or call it the unknown in this vast unfathomable universe... He believes that a deep non-authoritarian meditative process of self-inquiry, based on love, listening and looking from a silent state of being and presence, is essential to bring inner transformation and establish peace, harmony and compassion in one’s daily existence and society.

Mukesh is usually traveling throughout the year but he returns to the ancient city of Varanasi in North of India for brief periods and loves to sit quietly along the beloved Ganga river.

"School For Self Inquiry" is a registered educational trust devoted to the study and research of the fundamental questions of life inspired by the teachings of J. Krishnamurti. It is an initiative to learn together what it means to be a conscious, compassionate and responsible human being in these critical times. It is meant for those who are deeply interested in the exploration of truth and who wish to go into themselves with an open mind in order to bring about a fundamental transformation in themselves and thereby help create a peaceful society free from all hatred and divisions. It is an open forum where all those people are welcome who are serious to study, research and explore, as friends, the deeper dimensions of life and consciousness. 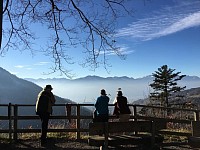 "Truth is in the silent observation of what is, and it is truth that transforms what is. - J. Krishnamurti
We are going through an unprecedented global crisis of recent times... The ever growing uncertainty seems to be a new normal now and the fact of impermanence is becoming so evident in our daily life… This  is also a great opportunity for a deeper learning and inner transformation. This may also be a time of inward crisis for many of us. We may feel a real need to share or open-up our hearts and minds with complete trust and unconditional listening without any fear of judgment.
These one-to-one dialogue meetings with Mukesh are an unique opportunity to delve deeper into oneself and together look at any existential question. The basic spirit of these sessions is to work together on oneself in an affectionate, leisurely and meditative space so that there is a natural opening up of fundamental problems and having an insight into them. The duration of the meeting could be from forty-five minutes to ninety minutes depending on your request.
Click to read more ...
School For Self Inquiry